The Coulomb interactions in materials that are at least partly ionic give rise to long-range contributions to the forces and allows the system to sustain a finite dielectric displacement in the long-wavelength limit (\(\vec{q}\rightarrow \vec{0}\)). This effect gives rise to a splitting of the longitudinal optical (LO) and transverse optical (TO) modes for \(\vec{q}\rightarrow \vec{0}\) that varies with the direction of approach (i.e. the direction of the momentum vector \(\vec{q}\)). To obtain the correct LO-TO splitting one commonly applies a so-called non-analytic term correction (NAC; see Gonze et al. (1994) and Gonze and Lee (1997)), which requires knowledge of the Born effective charges (BECs) \(\mathcal{Z}_{\alpha\beta}\) and the dielectric constant \(\varepsilon_{\alpha\beta}\), both of which are in general tensorial quantities. The NAC can be handled, e.g., by phonopy.

The long-range nature of the ionic interactions also poses a challenge when constructing force constant expansions (FCEs). In such cases one typically observes a slow and often non-monotonic convergence of the FCE with system size that in many cases renders it near impossible to obtain converged results. To circumvent this problem, one can separate the force constants into a long-ranged (Coulomb) and a short-ranged part, where the former contribution can be calculated using the same quantities as the NAC, namely the BECs and the dielectric constant.

In practice, one (1) substracts the forces from the Coulomb interaction (screened by the dielectric tensor) from the reference forces, (2) trains a (short-ranged) FCE to the remaining (short-ranged) forces, and (3) adds back the long-range contributions to the force constants. The thus-obtained force constants can then be used, e.g., to compute the phonon dispersion, the calculation of which should include the NAC.

This effects described above as well as the correction procedure are demonstrated for the case of sodium chloride (NaCl) below.

To begin with we consider a standard phonopy calculation with and without NAC to illustrate the impact on the phonon dispersion. First we set up a phonopy object with a set of force constants.

Next we compute the phonon dispersion a long a certain Brillouin zone path that will be reused below.

Now we add the NAC using parameters read from a file (BORN) and recompute the dispersion. Please consult the phonopy documentation for a description of this file. Note that can also provide the BECs and the dielectric constant directly via phonopy’s Python API.

Finally, we plot the two dispersions.

We now proceed to extract the FCs by regression via hiphive. Here, we use the same structures as for the “pure” phonopy analysis above, in which only one atom is displaced per structure. Even though, in general, in the regression approach one would use structures with more general displacement patterns.

First we apply the approach directly without special consideration of long-range (Coulomb) forces.

The results (“hiphive with NAC but without LRC”) reveal “oscillations” in the optical branches in the approach to \(\Gamma\), i.e. \(\vec{q}\rightarrow\vec{0}\). 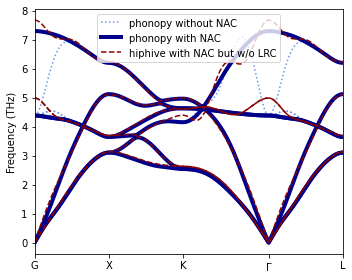 Now we repeat the regression approach but this time we remove the long-range (Coulomb) forces before training the short-ranged FCs and then add the long and short-ranged contributions to the second-order FCs before evaluating the phonon dispersion. For computing the contribution of the long-range forces to the second-order FCs, we use functionality from phonopy.

The resulting phonon dispersion (“hiphive with NAC and LRC”) is in excellent agreement with the reference dispersion from phonopy. 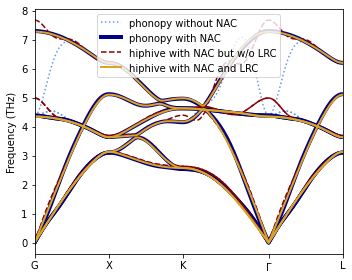 Next we will demonstrate that one can achive the same effect without LRC by instead using force-constant folding.

In hiphive the FCP is typically constructed for a supercell (denoted supercell_1). This FCP will not capture the longest ranged interactions in supercell_1 since the cutoff is enforced to be smaller than L/2 of the supercell.

To circumvent this we construct a twice as large supercell, supercell_2 = supercell_1.repeat(2), for which we construct the FCP and FCs. Next these FCs are folded back onto supercell_1 which will therefore include all the long-ranged FCs in supercell_1.

By employing the FC folding trick we can thus recover the correct phonon dispersion with NAC without using the LRC above.

The following cell can take a minute or two to run due to the large supercells being added to the SC.
Note that repeat(2) also repeats the displacements and forces.
Next we train a FCP using the repeated training structures.
This will cause the optimizer to print a condition number warning due to there being linearly dependent parameters. This us due to the fact that we are trying obtain FCs that are longer ranged than the original supercell allows for.

This warning is expected and not a problem here since our goal is to fold the resulting FCs back onto a small supercell. 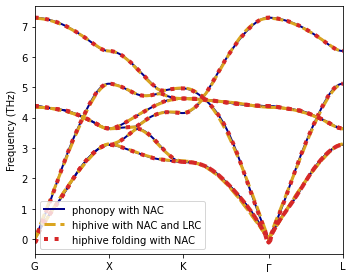